A Guide to Stok Butane

Sourced from different parts of the world — anywhere natural gas is plentiful, actually — butane is a natural gas derivative. That means it is extracted from natural gas, but does not exist in and of itself in large enough quantities to be useful. Butane is created when natural gas is refined, and also results from the processing of petroleum. It is highly flammable and known for its ability to create a stable flame that can attain temperatures as high as 2,700 degrees Fahrenheit.

Made in the UK, Available Worldwide

Made by Keen-Newport in the United Kingdom, the STok butane brand is associated with a history of quality and purity that few competitors can match. In fact, Keen-Newport started making butane 50 years ago, and its products became a fixture in the market for disposable or refillable lighters soon afterward. When the company expanded and began looking for new markets, the idea for Stok butane was born.

Today, STok butane is 99 percent pure, contains near zero impurities, and is regularly voted the top butane in the industry — including 2013. Its butane, either in canisters for butane refill, or as torches or lighters, is available around the world. It is distributed in the United States by Florida-based Impulse National Inc. under the name STok FYR.

Refined butane is used all around the world in hundreds of applications. Whether its gas is used to power a torch lighter or camping stove, SToK USA believes in the philosophy of transparency when it comes to safety data. Its MSDS is readily available on its website and elsewhere, but here are the important parts of it to remember in order to stay safe when using the product. 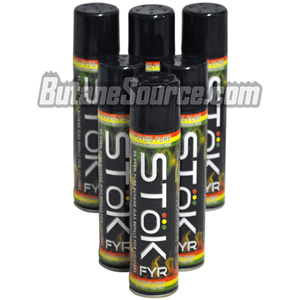 As a company, SToK is known far and wide for its amazingly pure and refined butane, which is used in lighters, torches, camping stoves, and many other tools and applications around the world. A common misperception is that butane is mostly used for lighters and torches, when in fact its utility has a far greater reach.

SToK markets its own torch, the "SToK FYR Large Torch," which puts out a flame that reaches a temperature of 2,700 degrees Fahrenheit — hot enough to cut through steel. The company also included a child safety latch in the design, as well as 2-way adjustable flame control and a lifetime warranty.

Stok butane also is available in 300ml canisters and sells direct from the website in packs of three or 12.

Loosely defined as advocating values and norms that deviate from mainstream culture, "counterculture" takes into account a wide range of social activities and events, from music to literature to politics to everyday lifestyle. To say there is agreement on a single definition is impossible, but what is indisputable is SToK USA’s commitment to and support of counterculture — the people, places, and tools of the trade.

My Butane Torch Produces a Flame with Two Colors — is that Right?

Yes, in fact, it is. If you were to view it under a dimmed light, you may notice what you think is an illusion, but is not. The torch produces an inner and outer flame, the outer one being a dark transparent blue, and the inner flame being opaque.