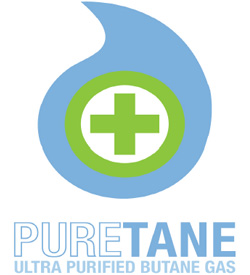 What can be said about a brand that so dynamically surpasses industry standards that it becomes practically incomparable to it’s peers? Puretane has done just that: created an entirely new tier of canned butane of a quality quite literally unavailable to most consumers before it’s introduction just a few years ago.

What Is N-Butane? How Is It Different From Regular Butane?

The term “butane” is really a misleading misnomer. Butane is it’s own gas, but we use the same term to describe lighter fluid of all types. So “butane” is actually used as a blanket term for a combination of dirtier gases.

The correct term for what we usually buy in cans as “butane” is actually “LPGs,” or “Liquefied Petroleum Gases.” These gasses include everything from ethane to propane to nitrogen, all of which tend to end up in a standard can of over-the-counter “butane” lighter fluid. This old standard of lighter fluid sold as butane is actually only about 70% butane! The rest of the can contains roughly 28% isobutane, 1.5% propane and 0.5% nitrogen.

Why the seemingly intentional name juggling started in the first place is anyone’s guess – my assumption is “LPGs” was just not as catchy of a name. At least the reason these gases are left together is much simpler: they come out of the ground together, and it takes a rather extensive amount of processing to separate them. All of these gases are useful as fuel sources. They all burn and all condense into liquid with a relatively low amount of pressure. These attributes made the LPG soup a reasonable, easy-to-transport fuel source which is still used for many applications today, both commercial and industrial. It wasn’t until many decades after this fuel became popular that new, industrial processes started demanding a higher purity. N-butane met this quality standard, and began it’s emergence into the advance of refrigeration and propellants.

“N-butane” is short for “normal butane.” It’s the term used to describe pure butane gas with no other gases and practically no impurities. Until recently, it was perhaps better known only in scientific circles, and more commonly referred to by a more articulate identifier: its chemical composition, C4H10. The gas is odorless, colorless, highly flammable, easily liquefied, and when n-butane is surrounded by oxygen, it can burn to produce carbon dioxide or carbon monoxide. Now Puretane master cases can be purchased making N-butane more readily accessible to the retail consumer.

These properties made n-butane ideal for a number of specialized applications, but the amount of effort it took to refine the gas kept the price too high to be produced for anything but large-scale industrial operations.

In recent decades, however, n-butane’s unusual purity has led smaller entrepreneurs to demand a more commercially viable product. For years, this demand was met with varying success by large-scale gas manufacturers begrudgingly selling awkward amounts of n-butane to individuals – awkwardly small to the manufacturer, and awkwardly large for the individual.

The reason that the market has demanded this purity in a smaller package has largely been to satisfy a culinary demand. Normal butane is used to extract volatile flavor molecules at low temperatures from ingredients like hops, which has led to an astounding revolution of flavor profile in beer and other consumables. The quality of the butane allows for such extreme processes without the concern of adding harmful byproducts from a lower-quality solvent. Puretane offers the purity of n-butane in a smaller package – easily available for the first time ever at local stores.

In Walked The Butane Cowboy

Adam Hopkins is the man behind this revolution in distribution, but butane wasn’t his first foray into the business scene. Hopkins got into butane during years of selling other products that were staples for U.S. Head Shops. These small businesses market to a particular demographic that has been growing rapidly in recent years – especially in states affected by the growing Cannabis legalization effort. In a recent interview with High Times Magazine, Hopkins pontificated on the burgeoning market that he tapped into.

“I talk to a lot of headshop owners around the country, and I noticed how huge butane was getting,” said Hopkins. “Our retailers couldn’t get enough of it…but most of the supply chain comes from South Korea and gets locked up at the port for months waiting for inspection.”

Hopkins had inadvertently stumbled upon a realization that seemingly no other American entrepreneur had had: there was a rapidly growing demand for high-quality butane in the United States that was only being filled by international companies with limited integrity for purity.

As a response, he started his own company and introduced entirely new standards in production – from the quality of the butane itself, to even a new standard of quality for the containers. Hopkins started sourcing local oil from the Gulf Coast and using it to produce his own butane in a Long Beach refinery. He’s been known as the “butane cowboy” ever since.

“Most of our oil comes from the Gulf of Mexico and gets refined right in the Gulfport/Shreveport area. No problem with customs, no boat from China.”

The advantages of controlling the operation from the source, as well as the subsequent packaging, has many advantages. Avoiding international shipping is a major boon in itself: not only is the price of shipping a fraction of what it would be, but customs can be avoided entirely. This has been a major hangup for butane manufacturers in the past, since so much of their supply comes from South Korea and consequently has a standard of getting locked up in customs indefinitely. Certainly not ideal for perpetuating business.

Better access isn’t the only advantage Hopkins achieved with his new model, however. His main goal was to produce a butane that could meet the rigorous demands of a market now geared towards using the gas in a new manner: as a solvent for making consumable products like hop extract for craft beers. Until Puretane hit the market in 2014, anyone experimenting with such processes had to go far out of the way (and hope a major manufacturer would, too) just to get n-butane – the product Hopkins is marketing to the general public for the first time. Before then, it could be special-ordered from overseas, but the quality standards of both the product and the packaging were always in question.

“No other country in the world has environmental regulations as tight as America,” claims Hopkins. “Here, you know that the filling room was clean, free of particles, and that the lines were cleaned between batches.”

The only other truly American butane brand is Ronson, but their gas is compromised by an over-adherence to standards. Because butane is colorless and odorless, the law requires manufacturers to add sulfur so that dangerous leaks can be detected. Ronson adds mercaptans – an organic sulfur with a particularly foul taste – to keep their factories and employees safe. The result is a gas suitable for lighters, but not much else.

Puretane holds an entirely different quality standard, and consequently requires a very different process altogether to purify their product. This process, called fractional distillation, refines the original combination of gases with less than 70 percent actual butane (what you’d normally find in Ronson or almost any other brand) into an impressive 99.9998% purity. That leaves just one ten-thousanth of a percent of sulfur: still enough to maintain safety standards, but so low that it qualifies the gas as medical-grade.

The quality standards don’t end with the remarkable purity of the product: the containers that butane gas has been shipped and sold in have long been riddled with errors that Hopkins vowed to correct. Remember that traditional butane canisters were never originally designed to maintain such precise quality. To this day, the standard method used to produce them includes an astonishing number of health hazards. Firstly, traditional canisters are made from sheet metal that is “rolled” into a tube that must then be glued together with an extremely toxic epoxy. The rolling process itself requires a petroleum lubricant that stays on the inside of the can, but the epoxy is the bigger concern. To create a glue (epoxy) that can maintain the intense pressure of the condensed gas requires extreme inorganic compounds that compel the FDA to demand bold uppercase letters on anything using it that might get consumed.

That wasn’t good enough for the Butane Cowboy. Determined to maintain the extremely high quality standard of the n-butane he was now producing, Hopkins went about revolutionizing the bottling industry as well. He designed a canister that could be “stamped” instead of “rolled” into shape. This breakthrough immediately eliminated any petroleum lubricant used in the process and almost entirely eliminated the need for epoxy. What’s left in the final product you find in your local head shop – or ButaneSource.com – is an unbelievably pure n-butane previously unavailable for popular consumption. Flavor aficionados rejoice! Your time has come and this is the product for you.