Need a New Soldering Iron? Here’s Why You Should Go With a Butane-Powered Model 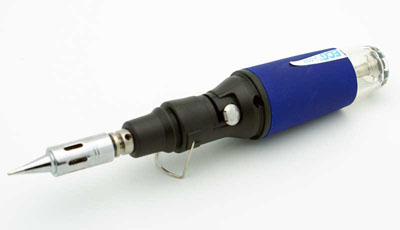 Whether you’re a professional plumber or just the home handyman, you may rely on a soldering iron for quick repairs, installation, or electronics assembly. Although there are many types of soldering irons to choose from, there are a few reasons why a cordless butane-fueled model might be the best tool for the job.

What is a Soldering Iron?

Cordless soldering irons are ideal when electricity is unavailable. These small irons can be powered by either a rechargeable battery or refillable butane gas that combusts to heat the tip. Although the temperature of these irons is not controlled directly, users can adjust heat settings by controlling gas flow. Many butane-fueled soldering irons have interchangeable heads to fit a wide variety of purposes and situations. These may include different sized soldering tips, a sharp knife for cutting plastics, a blowtorch with a small flame, or a hot air blower.

Why Choose a Butane-Fueled Soldering Iron?

Depending on the type of job you need to perform, you might want to utilize a different or even multiple soldering irons. For most jobs, however, multi-purpose butane-fueled cordless soldering irons are the best hand tool for soldering tasks that require more precision and control than a larger butane torch can provide.

While butane-fueled soldering irons used to be affordable only to the professionals, they are becoming increasingly available to the casual hobbyist or occasional repairperson, and it’s easier to find great deals on high-quality kits online.

When your butane soldering iron is running on empty, visit Butane Source to stock up on butane refills. We offer all of the best brands such as Puretane butane, Colibri, and Newport at some of the lowest prices around.