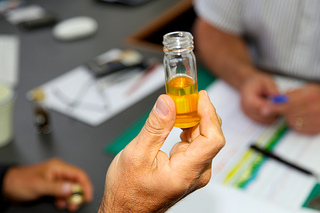 Once at the processing plant, raw natural gas is put through several steps in order to separate it into its various components. Consumer natural gas is almost entirely composed of methane, which means that all of the raw version’s other components, including butane, must be removed and isolated. Natural gas is often dissolved in oil, which needs to be separated using specialized equipment. Sometimes, the gas will naturally separate from the oil once both are released. At other times, they need to be pulled apart using a conventional separator inside which gravity aids to isolate the heavier liquids from the lighter gases. Sometimes, a more specialized machine such as a low-temperature separator is required.

While most liquid water is removed from natural gas near the wellhead, additional water vapor must be removed by dehydrating the natural gas, either through absorption or adsorption. Adsorption is the process by which water vapor is condensed and collected on the surface of another solid or liquid. Absorption occurs when a dehydrating agent removes water vapor from the natural gas. Absorption can occur through glycol dehydration while adsorption occurs through solid-desiccant dehydration. Glycol has a natural affinity for water. When it’s introduced to wet gas, it attaches to the water molecules, gets heavy, and sinks to the bottom while the dry gas is filtered out. In solid-desiccant dehydration, gas passes through towers that contain activated alumina or granular silica gel material, to which water molecules attach.

Natural gas liquids (NGLs), including butane and propane, are next removed from the natural gas by one of two methods: absorption or the cryogenic expansion process. Similarly to absorbing the water from natural gas, NGL absorption uses oil that attaches to the NGLs. After the oil picks up the NGLs, the mixture is heated so that the NGLs boil off while the oil remains a liquid. This process recovers about 75% of butanes. The cryogenic expansion process better extracts lighter hydrocarbons such as ethane from the natural gas stream by chilling the gas stream to a temperature of -120 degrees Fahrenheit. Refrigerants cool the gas before a turbine spins rapidly to expand them. While methane stays in its gaseous form, the other NGLs condense and are easily extracted.

After all of the NGLs are separated from the mostly methane natural gas, they must be individually separated before they can be used. Using fractionation, the NGLs are heated and boiled off one by one depending on their different boiling points. The first step, deethanizer, boils off the ethane, then depropanizer separates the propane. The third step, debutanizer, boils off the butanes. The final step is the butane splitter or deisobutanizer, which separated n-butane from isobutane.

Although the highest quality butane companies require that they receive only butane that is 97% to 99.5% pure from their suppliers, they run a final purification process at their plants using molecular sieves. Butane is then analyzed to ensure that it is pure and of good quality.

What is the Future of Butane?

As concerns about the limited quantity of fossil fuels and their effects on climate change continue to mount, scientists are constantly experimenting and trying out new and alternative sources of green energy that not only will not harm the environment, but are also sustainable. The problem with these alternative energy sources is that they remain expensive, unreliable, and not as powerful as fossil fuels. For the moment at least, and until a comparable energy source is found, butane and other fossil fuels are here to stay. Unlike gasoline and petroleum, butane and other NGLs burn more cleanly and are better for the environment. They are a powerful, greener alternative until non-fossil fuel energies become the norm.